We’re underway now. On Thursday, we left Berlin with good weather and comfortable temperatures. The sun was shining and strong winds carried us to Frankfurt on the Oder. We crossed the German/Polish border there and set up our tent a little further on. Naturally, everything feels a little uncomfortable. In the next few days our bodies have to readjust themselves to the demands of a long ride and remaining in the same position for months. Stretches and a few breaks help out a lot. The three following days were also sunny as we follow small, though well maintained, streets further east. Yesterday, a cold front caught us and it rained the whole day in temperatures of 45 degrees. In spite of our rain gear, we were soaked and stayed the night in a guest house in what, in Poland, is a well known convent, Jasna Gora. Now we’re continue, well showered, toward the Ukraine, which we should reach in the next 5 or 6 days. 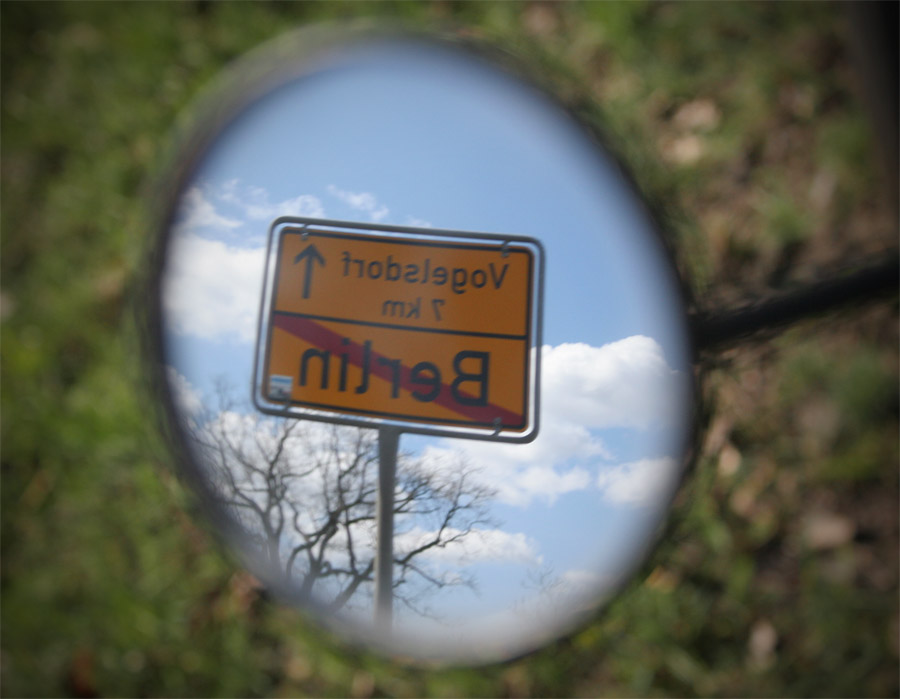 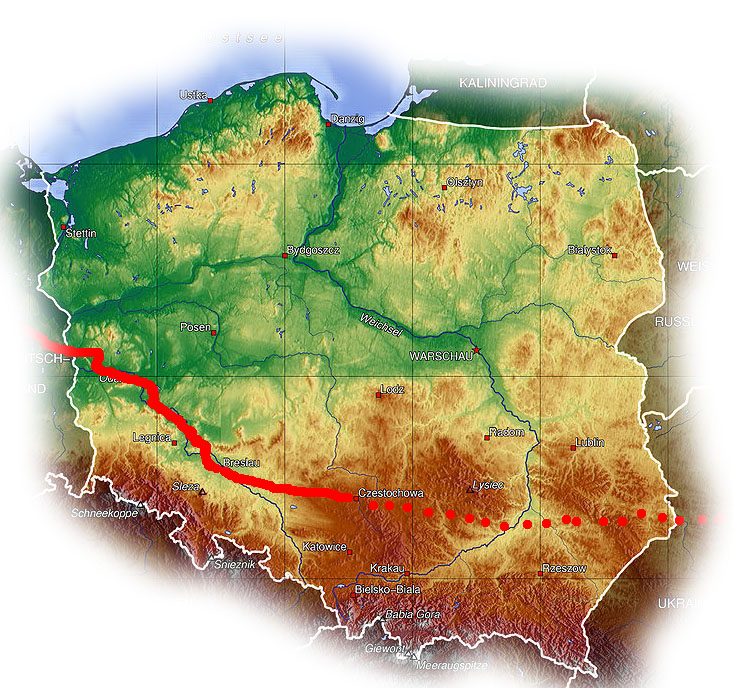 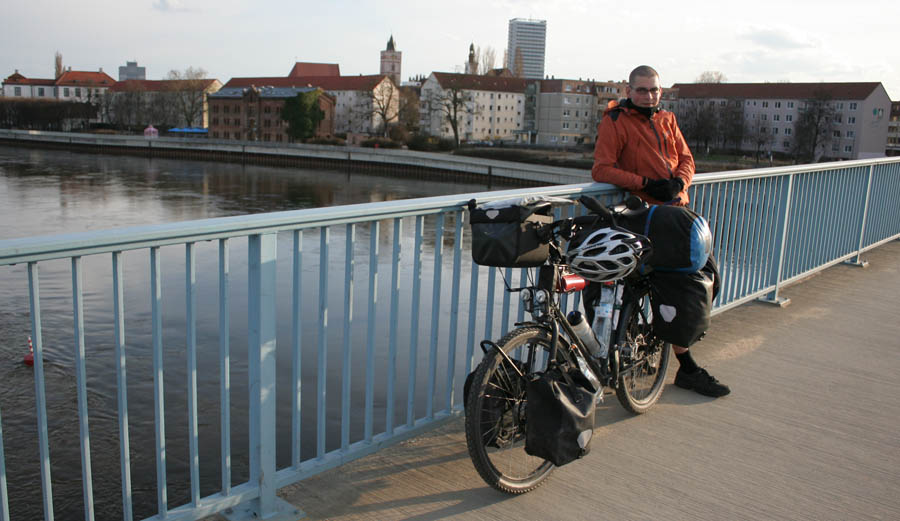 At the German/Polish border in Frankfurt/Oder 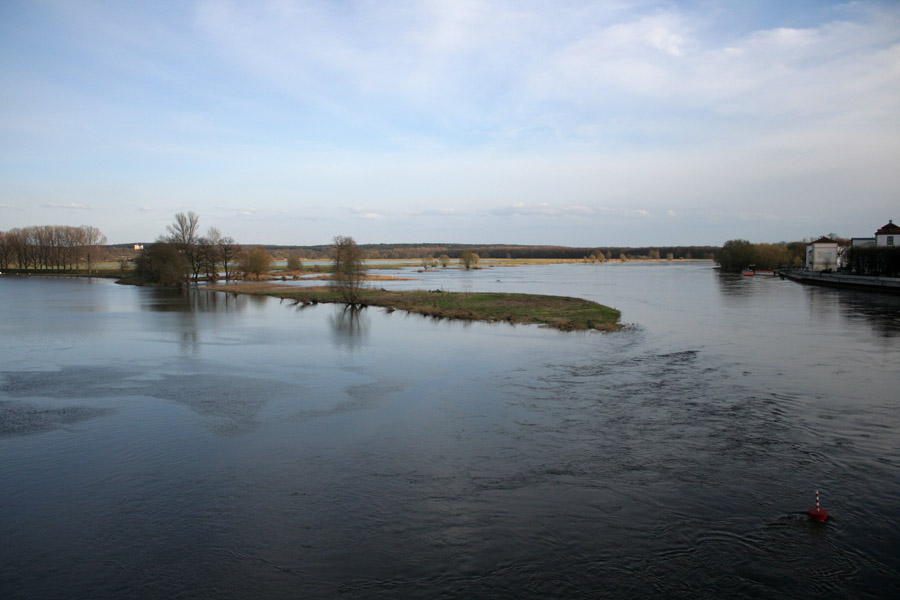 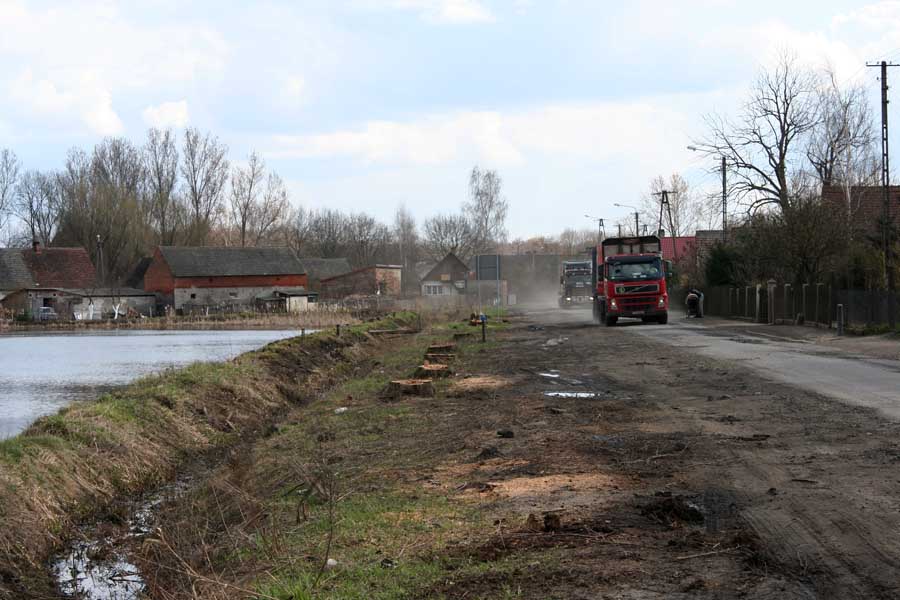 So far from Poland, till next time

Nearing the end, the time goes by really fast. Today is the first of april, 2010, six in the morning. after just 3 hours sleep, I was up already. I feel okay, not really too excited, a little sad, but also filled with anticipation for the approaching adventure. I’m packing my final things and, in a few hours, begin my six month ride to Asia. By my blog, you’ll regularly find updates, photos, and news, and I hope you enjoy following my adventure on this blog. 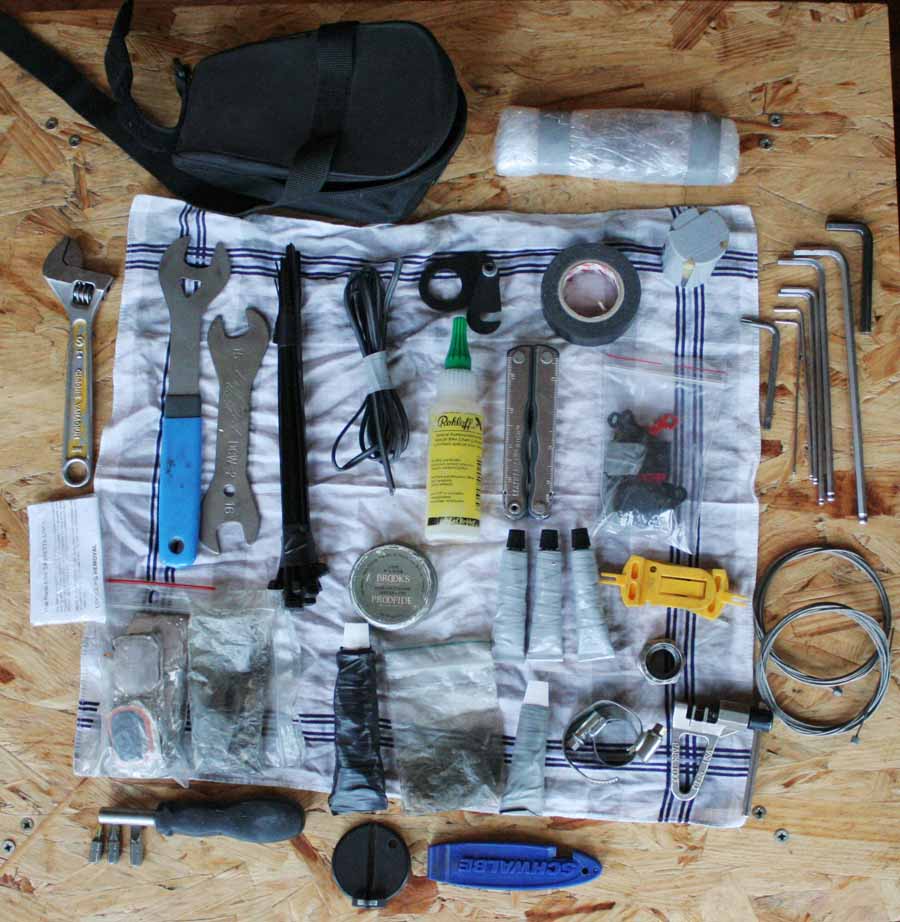 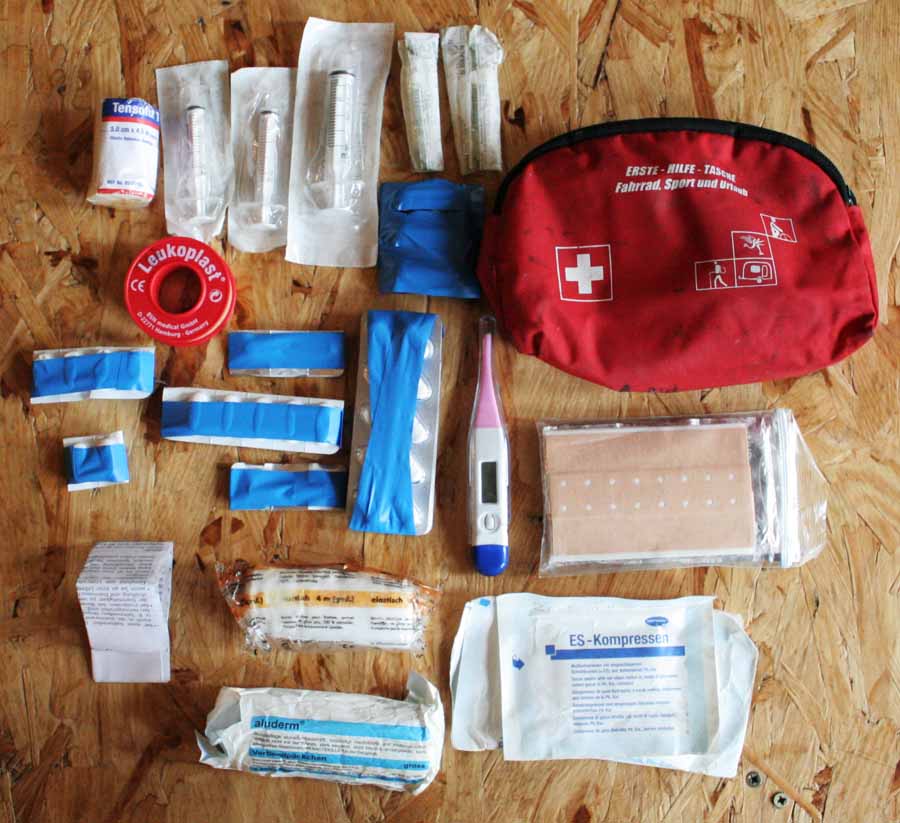 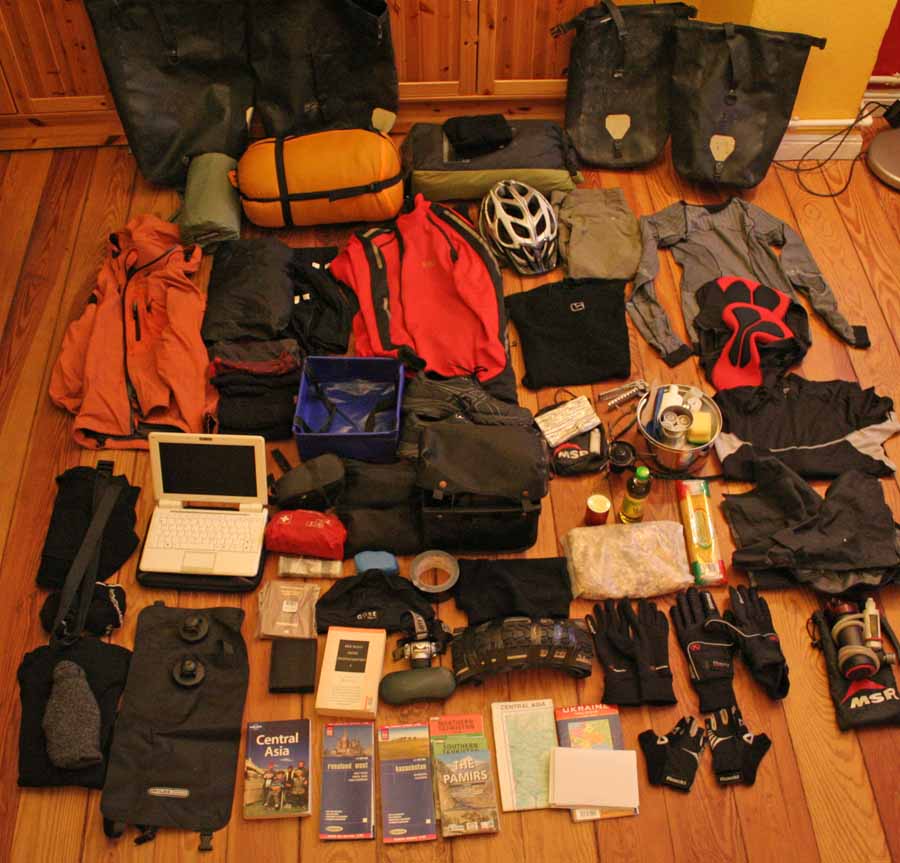 In a few days, I’m off on my third, large, multi-month bike tour!! I’m pleased that till now all has gone well without hiccups. Seriously, however, I thank you all for the many nice emails, cards and good wishes. They give me courage and energy. 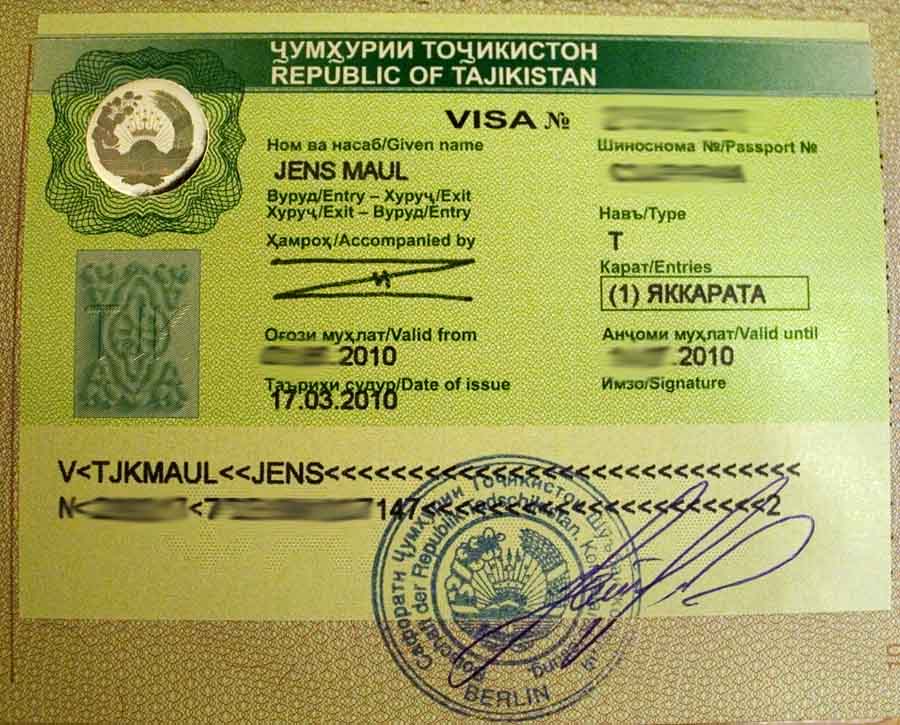 Last week I received a 45 day Visa from the Tajik Consulate. That satisfies one of the biggest bureaucratic hurdles and closes the chapter on the Visa stuff for the next few months. 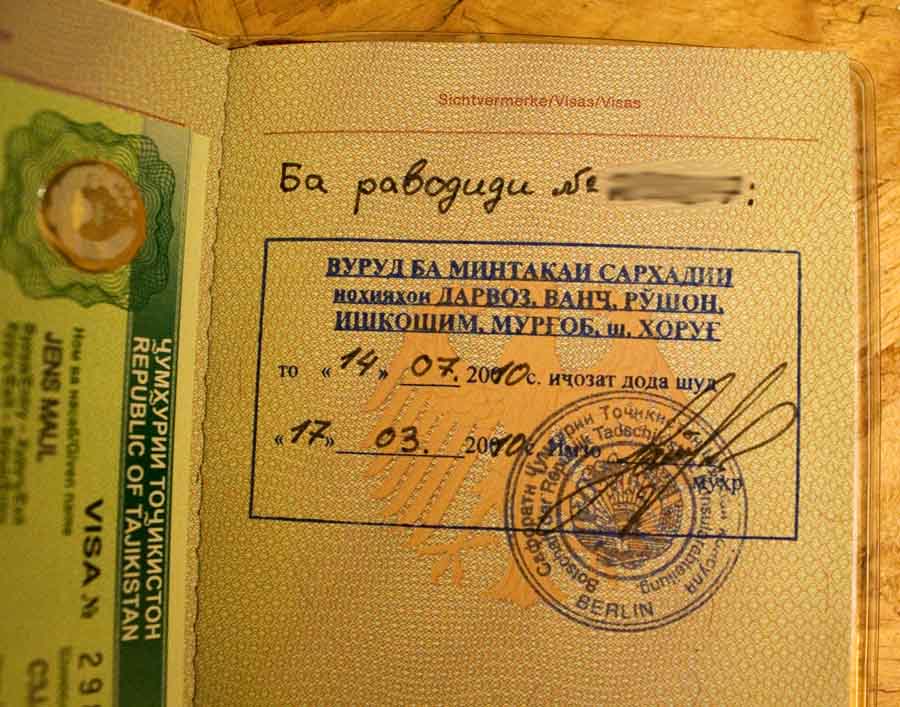 The Visa also included permission for the border crossing through the autonomous province Gorno-Badakhshan (GBAO). Ultimately, I needed this to cross the Pamirregion and save myself hours in front of the Tajik consulate there. 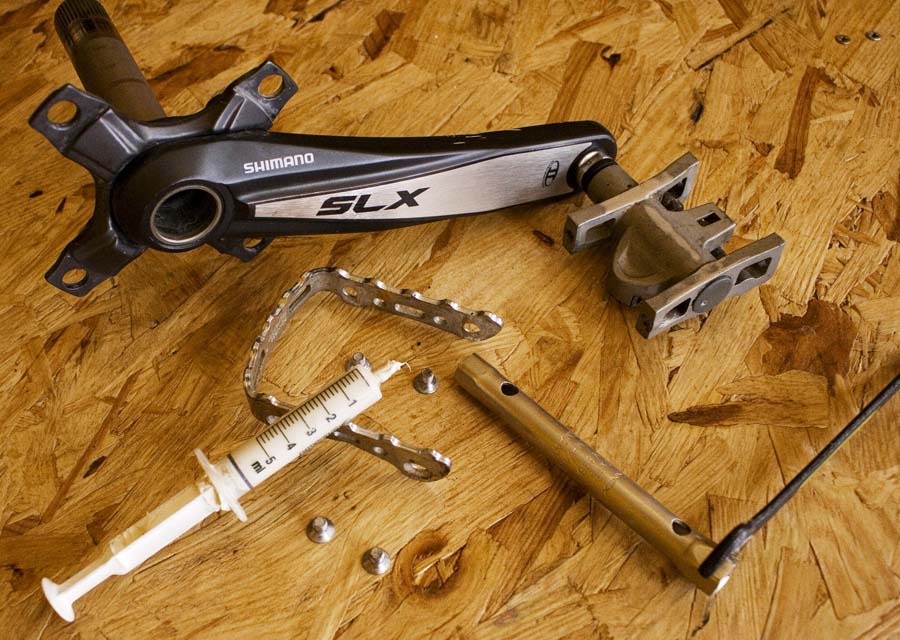 The maintenance on the tires is finished. Last Saturday was the first test ride along the Havel to Brandenburg. Care for the Shimano pedals PD-324 was somewhat complex. Because they always develop some play after thousands of Kilometers and because I didn’t have the correct tools, I had to improvise to correct the play. 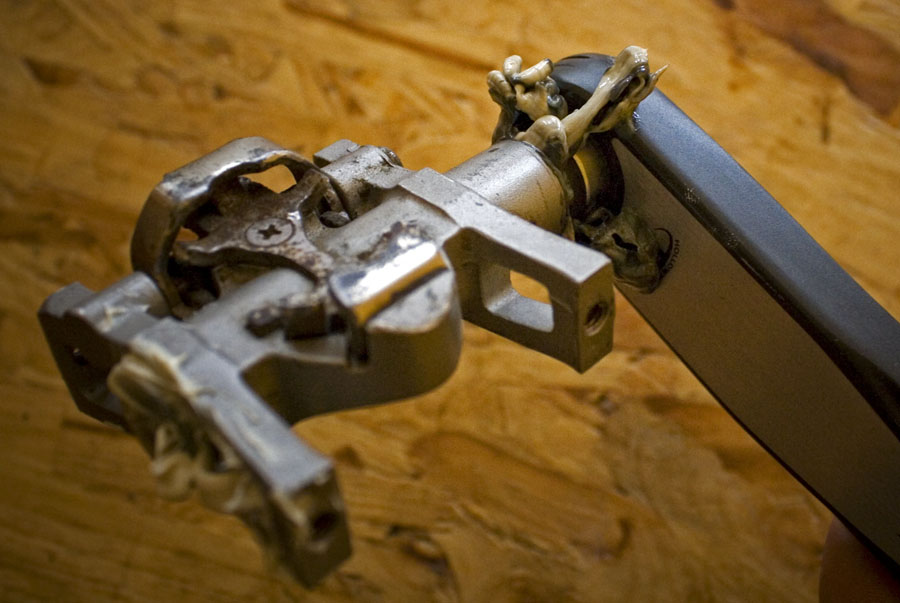 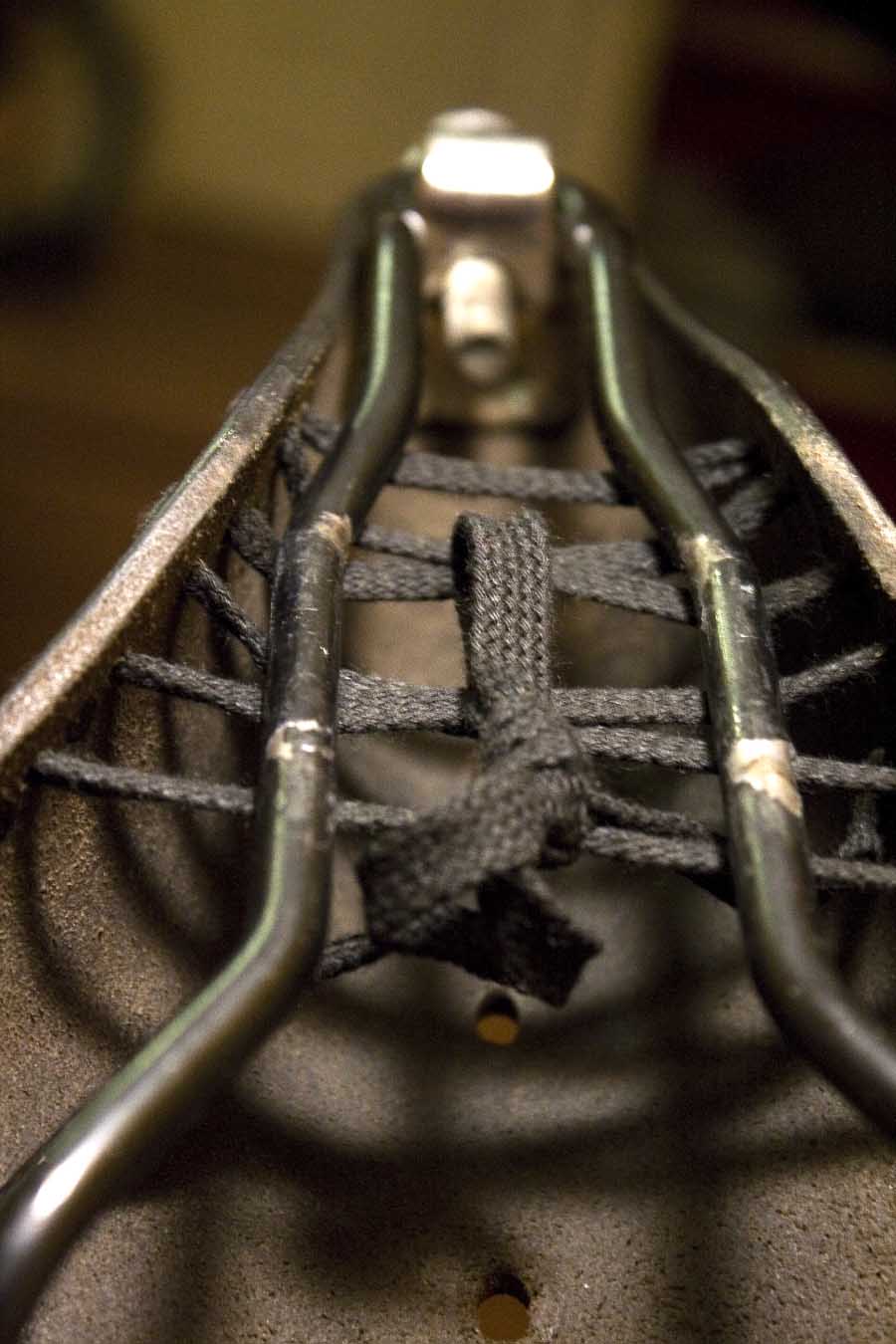 The generator mechanism for my laptop is finally finished. Unfortunately, a more comprehensive ride would be necessary to say, with certainty, that this mechanism will really work during the ride. The LED for the power cord lit up and I have a good feeling that the generator will really work. Also, I successfully completed the two Russian courses and can now, at least, say and understand basic things and read the Cyrillic alphabet. Now I’m concentrating on the final concerns, packing everything up in the travel packs and, what’s particularly difficult, saying goodbye to friends.
Till later–then my last entry prior to takeoff!!

in just two weeks I am leaving and I nearly finished with the preparation works. All vaccinations are up to date, only the Tajik visa is missing, now all necessary maintenance and replacement works on my bike are takeing place and almost all equipment arrived. 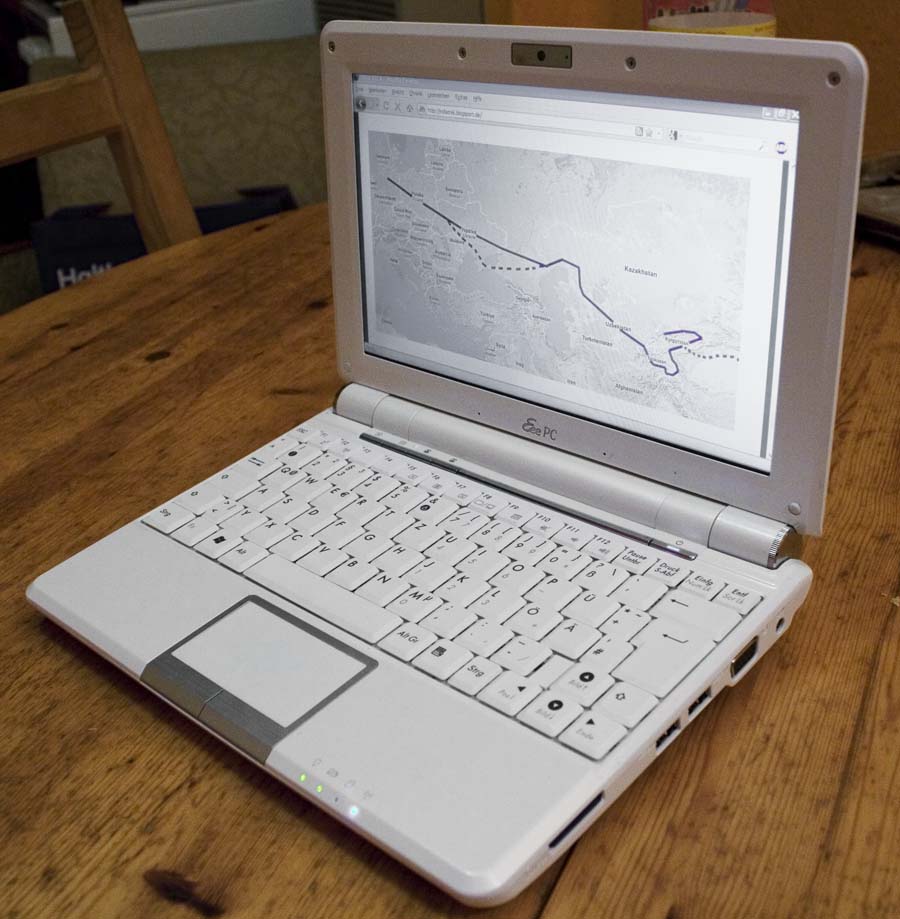 On this journey a little Asus Eee Netbook will accompany me. So I am somewhat independent of Internet cafes, can prepare texts, edit photos and as soon as internet is available, all the data just gets loaded online. Now I hope to be able to write more in detail, and no longer I have to create all the texts or copy handwritten notes in stuffy, crowded or by power outage menaced Internet cafes.
Thanks to the relatively strong battery I also could watch a movie on a rainy day in my tent … the battery is either charged while driving using my hub dynamo, or if I ever make a stop in restaurants or hotels. 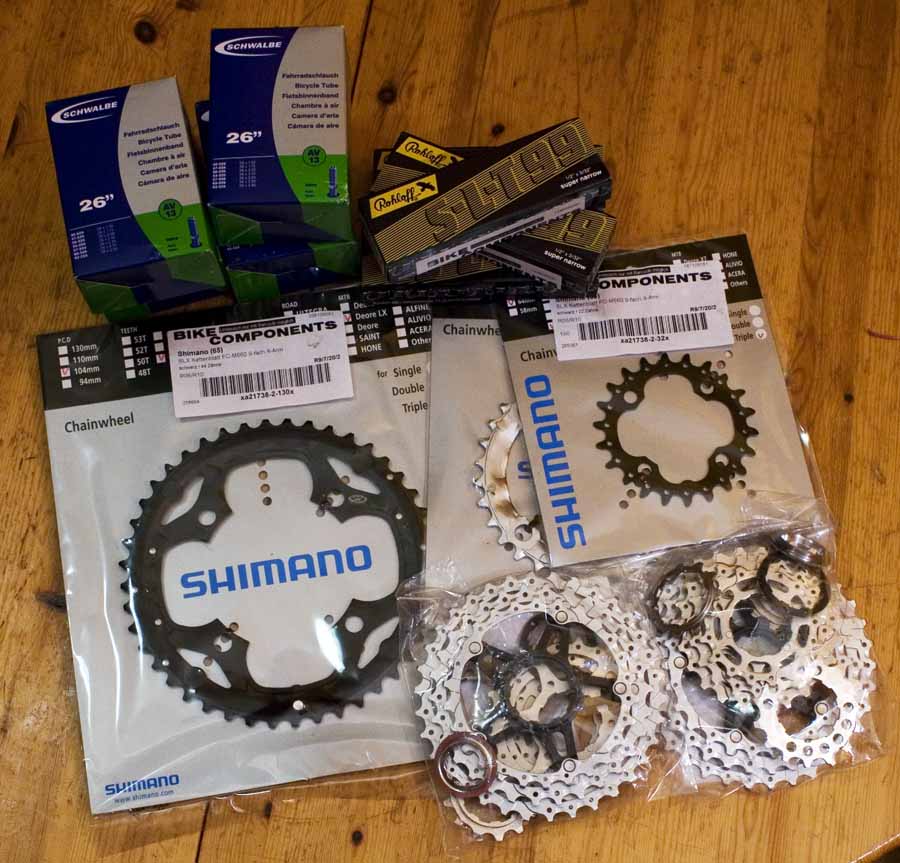 At the moment I renew the drivetrain completely. Except for the Mountain Goat chainring I replace all the parts. A new medium steel chainring, a new large chainring of aluminum, the Rohloff SLT 99 chain and an LX cassette I will hopefully carry me without complications to Central Asia. As a backup and as a replacement after about 2500 km a second Rohloff chain comes into my luggage. 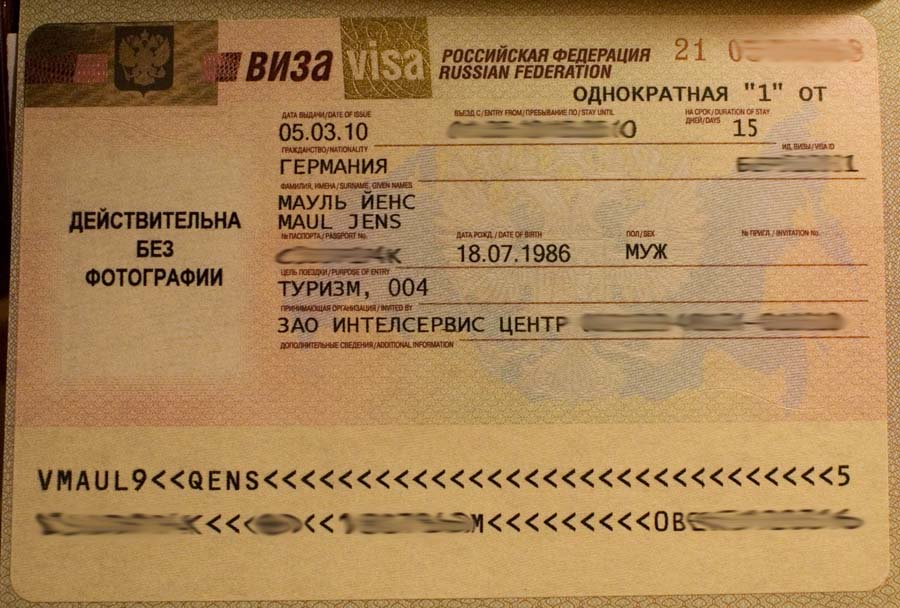 Here the Russian visa. A little more effort than for Kazakhstan was necessary. It requires an official invitation to Russia and a proof of medical insurance in the travel destination. I received the invitation of an agency within one week and as long the Russian Embassy needed for the issuance of my visa. The fee of 32 Euros for a fourteen day stay can be paid either in cash or by debit card at the consulate. 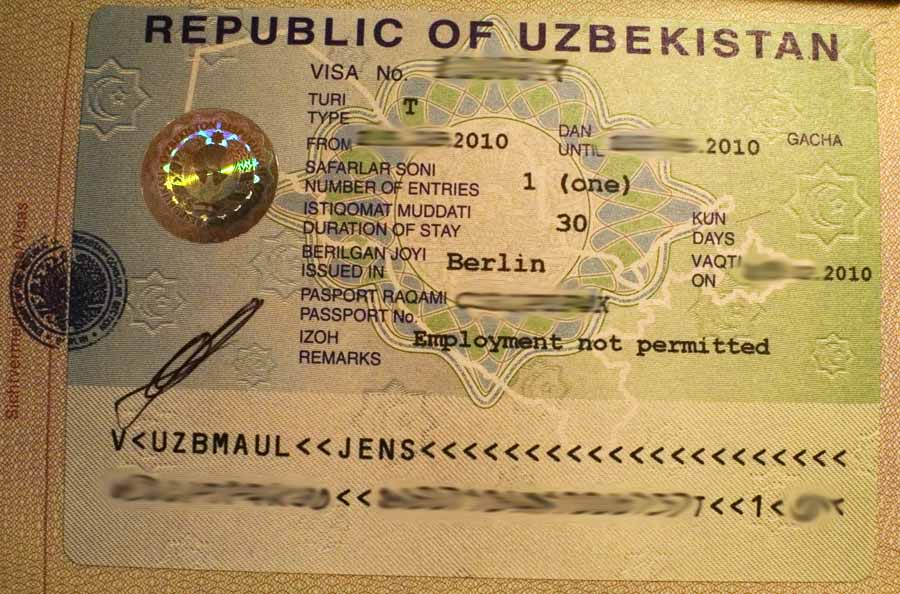 Also for the Uzbek visa I had to wait a week, but again, everything went smoothly. Monday I will visit the Tajik embassy and so should all necessary visa be available when I start. Later, in Dushanbe, the capital of Tajikistan, I will apply for the visa for Kyrgyzstan, and possibly also for China 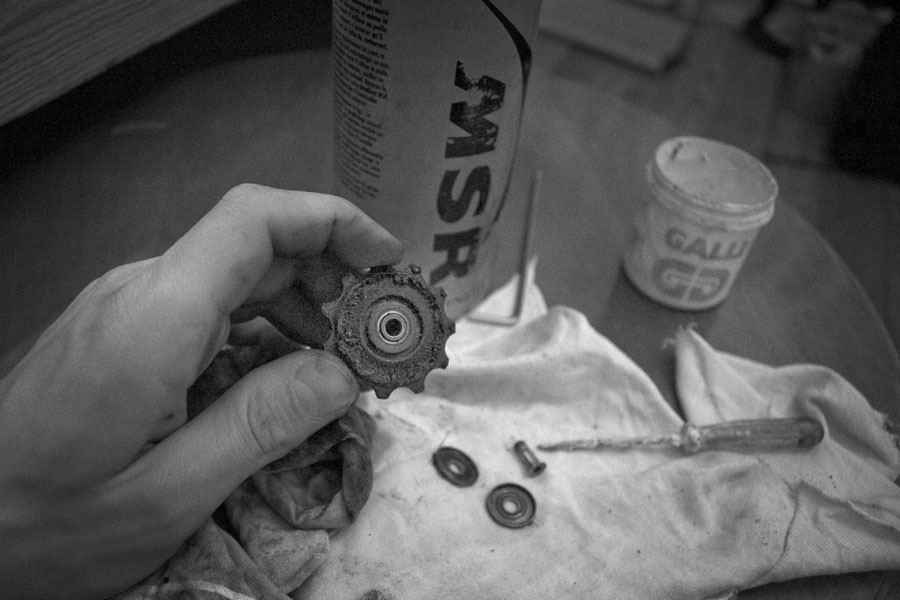 Hello,
by now preparations for my next bike trip to Tajikistan are running at full speed – my first Visa arrived today. 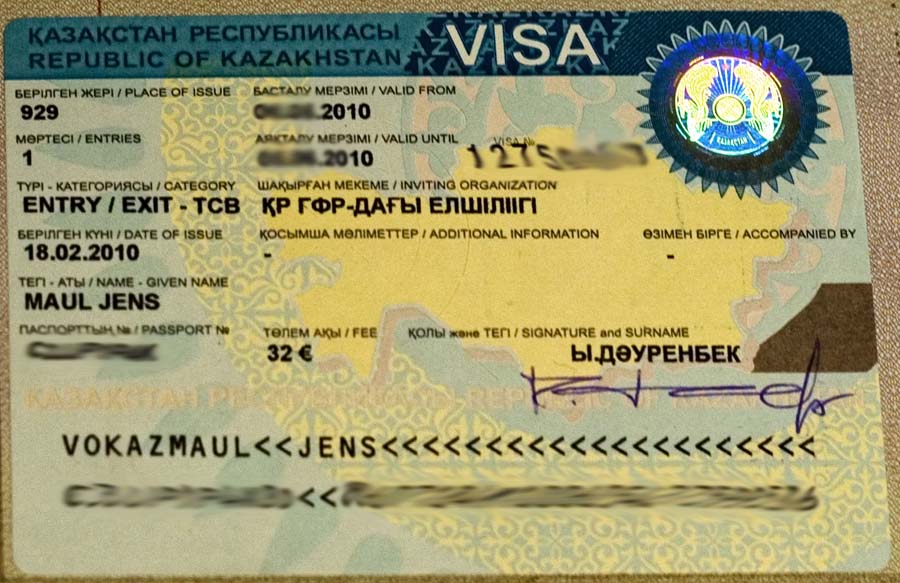 The application process for Kazakhstan is fairly simple. For a stay up to 30 days German Citizens do not need a letter of invitation anymore. The required 32 Euros has to be payed into the Kazakh bank account and after five working days you receive your visa in their embassy in Berlin-Rosenthal.

Also the vaccinations are making progress. A tick vaccination had to be refreshed, soon followed by one against hepatitis A. Thanks to the previous trips no further vaccinations are necessary for me. Recommended is a protection against hepatitis A & B, rabies, tetanus, diphtheria, polio, typhoid, encephalitis, and against meningitis. In addition South-Uzbekistan and South-Tajikistan are affected both by the relatively harmless tertian malaria transmitting mosquitoes and by the truly dangerous falciparum malaria transmitting mosquitoes during the warm months of the year. According to the WHO, drug resistances can arise with respect to chloroquine and sulfadoxine-pyrimethamine. This should be considered in the selection of a stand-bye drug. As a recommendation on the WHO website in addition to the obvious rules of conduct, such as insect repellent and long dress an active compound combination of chloroquine and proguanil can be found. 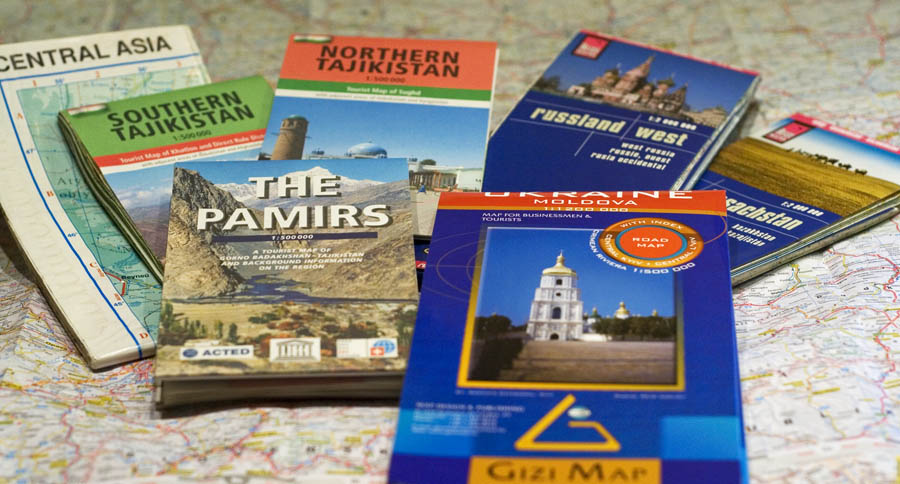 Furthermore all maps have been received by me, and detailed plans for individual sections can begin. Especially I am inspired the very elaborate and detailed maps of the Pamir region of Markus Hauser – among other things produced for UNESCO.

I am equally pleased about growing support. Julia will accompany me for four months to go on to the Pamir Highway – possibly even longer. Also I am extremely pleased to that Schwalbe has provided their newly developed expedition-tire, Marathon Extreme for a six-month stress and practice test. I am very excited about these new tires! In addition, I will be supported during the preparations by the online-shop bike-components.de from Aachen and by the bike-parts and accessories manufacturer Topeak. 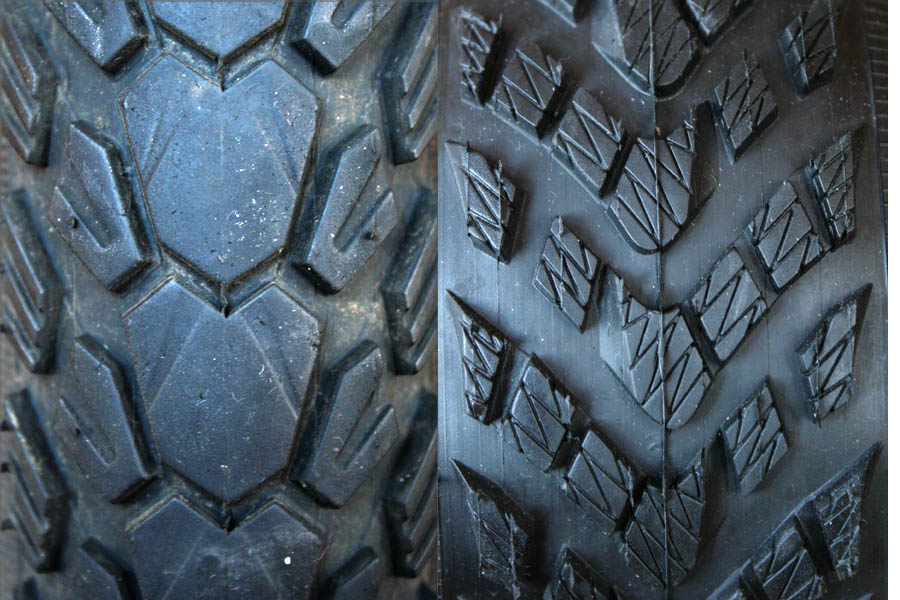 I have often wished, despite my long 130mm stem, for an even longer one. After a long search, I hope I have finally found the perfect match to my stem: Made from the Spanish company Monty, 150mm long, inclined 25 ° and actually thought for oversized handlebars – in my case, I put a little shim. 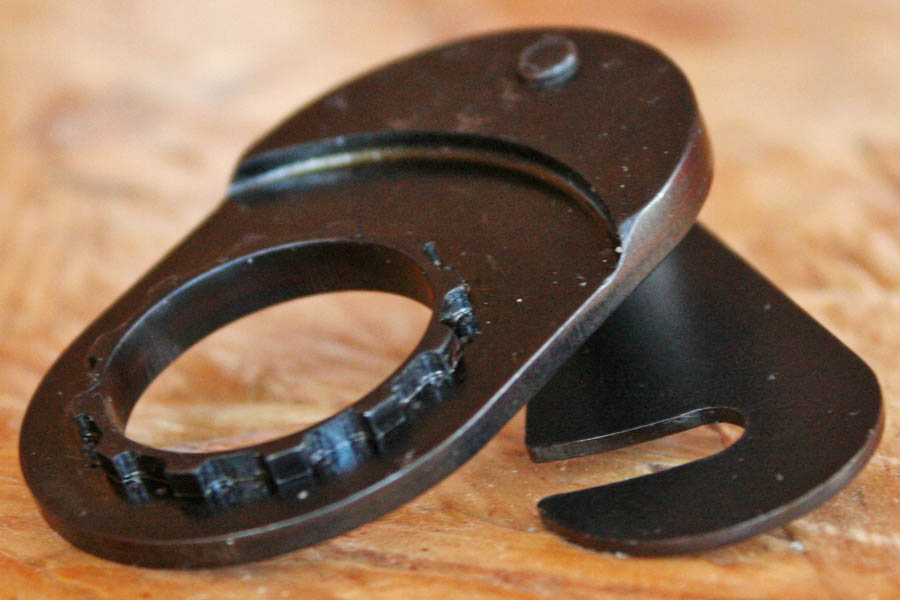 Another new feature in the tool bag: A small and really easy tool for assembling and releasing the cassette-lock-ring. 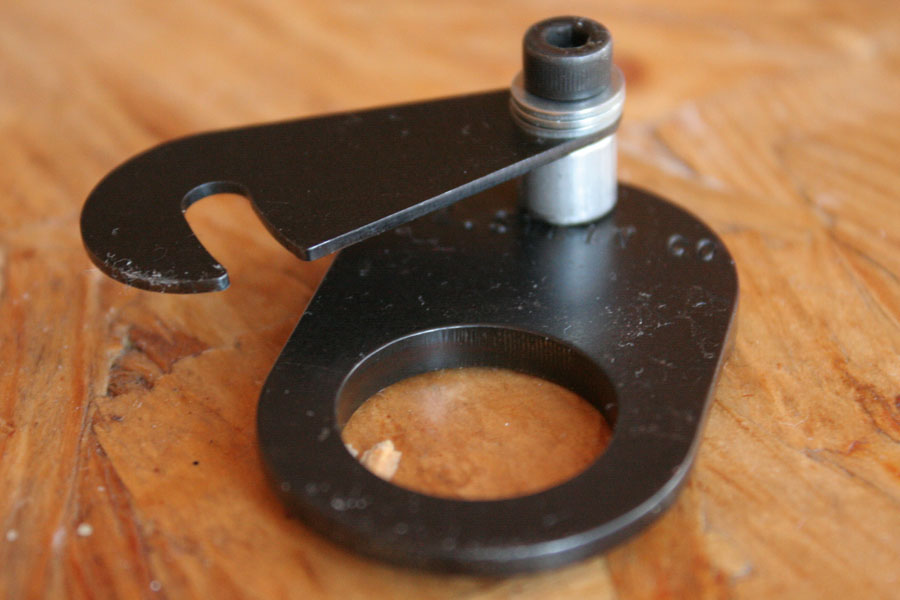 The ‘Hyper Cracker’ from the U.S. company J. H. Stein – this eliminates the need for a long and heavy counter-holder – that now takes the small swivel arm

So much for the current arrangements. Tomorrow I look forward to visiting the Uzbek embassy, the next few days planning and organizing will continue and I am particularly pleased to learn Russian during all of march, three hours a day, to get at least basic communication skills for the former Soviet states.

to my new travel-webblog! I moved and greet you on my now ad-free and redesigned homepage. I hope you will enjoy it.

Good news at the beginning: After a painful breakup last year and the early drop out of my bike journey through Canada and United States I am going to leave with new strength to a new tour in April: From Berlin to Central Asia! Firstly I am three months on my way through relative flat terrain: Through Poland, the Ukraine and Russia, then through steppes and deserts to Kazakhstan, south of the Aral Sea and across Uzbekistan. There part two of my journey begins: The high mountains of Tajikistan and Kyrgyzstan. On one of the highest roads of the world, north of Hindu Kush, along the border river to Afghanistan I follow the Soviet built, spectacular M41 through the remote Pamir Mountains to Kyrgyzstan, where I either ride in a big circle through the alpine countryside up to the capital Bishkek or across the Tien Shan mountain ranges to China, from where I am going to fly back home. As it happened on my other journeys, the exact route will arise on my way. For a better overview a rough map of my track: 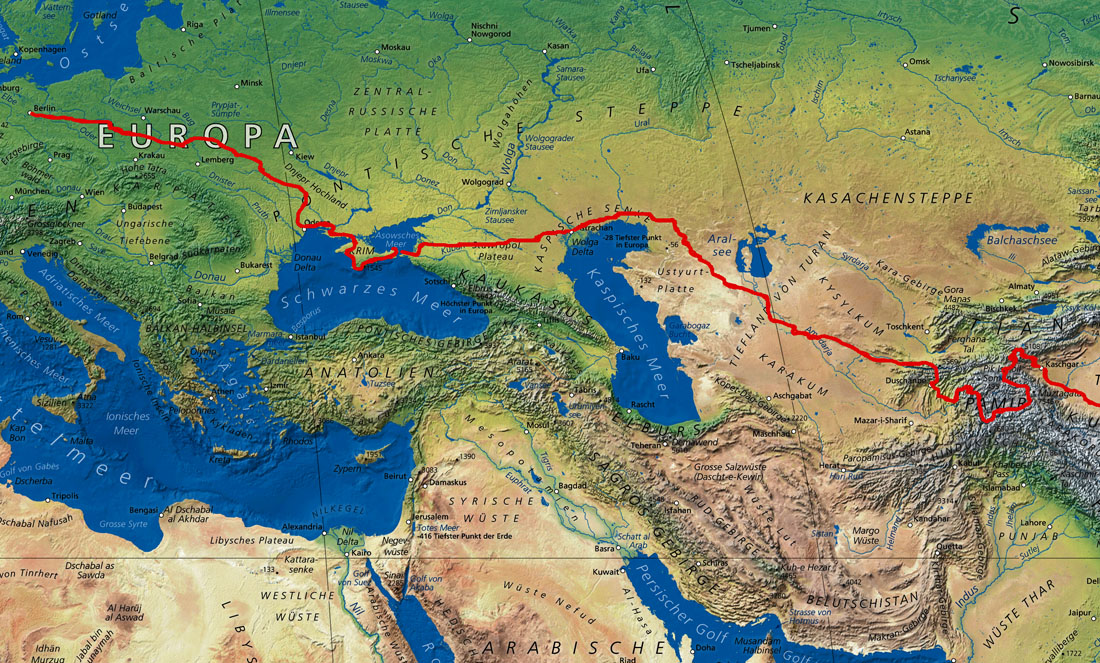 Although in the process of planning such travels something like routine arose, next weeks are calendared with lots of preparation works, vaccinations get refreshed, embassies are visited, some paperwork has to be done and although most gear already exists, still lots of bicycle parts and other equipment items have to be taken care of.

I am happy about any kind of support, even if it is “just” a friendly mail interchange or beneficial experiences and advices from other cyclists.

Bye for now, next time more about the journey